Deprecated: The each() function is deprecated. This message will be suppressed on further calls in /home/droneadvoz/dev/wp-content/plugins/js_composer/include/classes/core/class-vc-mapper.php on line 111
 Recent posts – Drone Adventures DEV
Skip to content

UAVs are increasingly used in humanitarian response. We have thus added a new Clicker to our MicroMappers collection. The purpose of the “Aerial Clicker” is to crowdsource the tagging of aerial imagery captured by UAVs in humanitarian settings. Trying out new technologies during major disasters can pose several challenges, however. So we’re teaming up with Drone Adventures, Kuzikus Wildlife Reserve, Polytechnic of Namibia, and l’École Polytechnique Fédérale de Lausanne (EPFL) to try out our new Clicker using high-resolution aerial photographs of wild animals in Namibia. 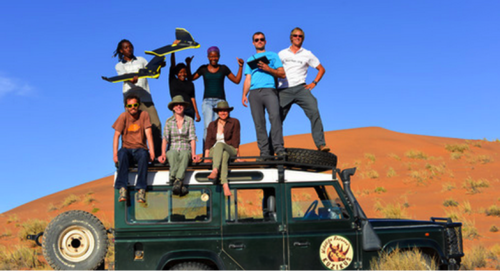 As part of their wildlife protection efforts, rangers at Kuzikus want to know how many animals (and what kinds) are roaming about their wildlife reserve. So Kuzikus partnered with Drone Adventures and EPFL’s Cooperation and Development Center (CODEV) and the Laboratory of Geographic Information Systems (LASIG) to launch the SAVMAP project, which stands for “Near real-time ultrahigh-resolution imaging from unmanned aerial vehicles for sustainable land management and biodiversity conservation in semi-arid savanna under regional and global change.” SAVMAP was co-funded by CODEV through LASIG. You can learn more about their UAV flights here.

Our partners are interested in experimenting with crowdsourcing to make sense of this aerial imagery and raise awareness about wildlife in Namibia. As colleagues at Kuzikus recently told us, “Rhino poaching continues to be a growing problem that threatens to extinguish some rhino species within a decade or two. Rhino monitoring is thus important for their protection. One problematic is to detect rhinos in large areas and/or dense bush areas. Using digital maps in combination with MicroMappers to trace aerial images of rhinos could greatly improve rhino monitoring efforts.”

So our pilot project serves two goals: 1) Trying out the new Aerial Clicker for future humanitarian deployments; 2) Assessing whether crowdsourcing can be used to correctly identify wild animals. 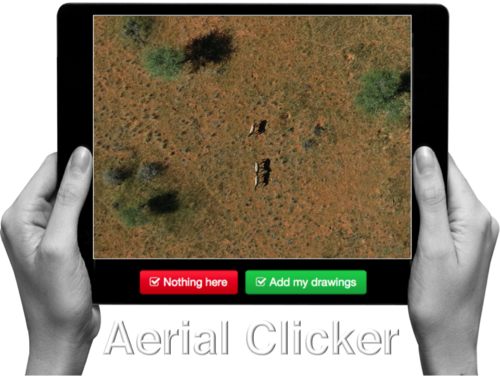 Can you spot the zebras in the aerial imagery above? If so, you’re already a digital ranger! No worries, you won’t need to know that those are actually zebras, you’ll simply outline any animals you find (using your mouse) and click on “Add my drawings.” Yes, it’s that easy : )

We’ll be running our Wildlife Challenge from September 26th-28th. To sign up for this digital expedition to Namibia, simply join the MicroMappers list-serve here. We’ll be sure to share the results of the Challenge with all volunteers who participate and with our partners in Namibia. We’ll also be creating a wildlife map based on the results so our friends know where the animals have been spotted (by you!). Given that rhino poaching continues to be a growing problem in Namibia (and elsewhere), we will obviously not include the location of rhinos in our wildlife map. You’ll still be able to look for and trace rhinos (like those above) as well as other animals like ostriches, oryxes & giraffes, for example. Hint: shadows often reveal the presence of wild animals! Drone Adventures hopes to carry out a second mission in Namibia early next year. So if we’re successful in finding all the animals this time around, then we’ll have the opportunity to support the Kuzikus Reserve again in their future protection efforts. Either way, we’ll be better prepared for the next humanitarian disaster thanks to this pilot. MicroMappers is developed by QCRI and is a joint project with the United Nations Office for the Coordination of Humanitarian Affairs (OCHA).

Any questions or suggestions? Feel free to email me at patrick@iRevolution.net or add them in the comments section below. Thank you!

Conservation Avant-Guarde: SaveOurSeas Foundation’s collaboration with DroneAdventures for mapping a marine reserve from the sky

With already over 15 missions under our belt, we have mapped just about any landscape with our drones. But the one thing we haven’t done yet is to give marine conservation a hand. Mapping St-Joseph atoll in the Seychelles and acquiring high-resolution aerial images to identify shark and ray pups seemed like the perfect challenge to introduce our drones to the salty and wet air of marine conservation.

END_OF_DOCUMENT_TOKEN_TO_BE_REPLACED

What happens when you mix ancient Bushmen knowledge with the latest in drone technology? Our experiment of joining these two very opposite worlds presents a completely new way of counting wildlife.

By Matthew Parkan and Sonja Betschart

END_OF_DOCUMENT_TOKEN_TO_BE_REPLACED

Exactly one year after our first mission to Namibia for the SAVMAP project, a team made up of Drone Adventures, EPFL’s LASIG lab and Kuzikus Wildlife Reserve came together again in the Southern African savanna from May 16 to 23, 2015 to apply last year’s findings and push the limits of civilian drone use for nature conservation applications one step further.

Protecting endangered animals like the Black Rhino and plants like the endemic and fascinating Welwitschia mirabilis, proposing new ways of managing land sustainably in semi-arid savannas and finding new approaches to counting wildlife were all important topics on our agenda this year.

END_OF_DOCUMENT_TOKEN_TO_BE_REPLACED

When Typhoon Haiyan, known as Yolanda in the Philippines, struck the South East coast of the country six months ago, on November 8, 2013, it devastated entire communities – tearing apart thousands of homes and destroying livelihoods. Many of those worst hit were ‘informal’ unplanned homes, situated at or near the water’s edge.

END_OF_DOCUMENT_TOKEN_TO_BE_REPLACED

Most Drone Adventures missions to date have involved using eBee mapping drones to assist humanitarian projects. However in recent months we have taken part in an increasing number of environmental conservation projects too, such as our recent Namibia mission.

Here in Switzerland we were contacted by Pro Natura, a non-profit conservation organization with over 100,000 members, to help with a unique biodiversity project – using drones to create orthomosaics and terrain models of an ancient
peat bog in need of regeneration.
Following the redevelopment work of site one, the presence of so much surface water and tufts of new dark green vegetation now indicate a healthy site.

END_OF_DOCUMENT_TOKEN_TO_BE_REPLACED

Timothée Produit of EPFL’s LASIG lab was part of our Namibian mission in May 2014. During the mission, Tim gave lectures both at the Polytechnic of Namibia as well as at the Gobabeb Research & Training Center on how to use the acquired drone imagery to classify terrain. Once all the imagery of the mission had been processed back home in Switzerland, Tim went on to use our data for classification purposes.

In this blog, Tim and his colleague Matthew Parkan show us how to use multi-spectral imagery acquired by the eBee and converted to NIR and RGB orthomosaics with Pix4Dmapper to create vegetation base maps. 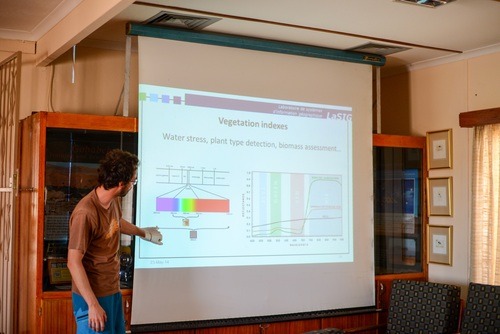 END_OF_DOCUMENT_TOKEN_TO_BE_REPLACED

It isn’t every day that we get to fly drones over one of the Seven Wonders of the Ancient World. Thanks to our intrepid partners and hosts, the Institute of Fine Arts at New York University (NYU) and the Austrian Archaeological Institute, we’ve just returned from an amazing week in Southern Turkey where we flew over ancient theatres and temples dating as far back as the 10th Century BC. We’ll be publishing a longer, more detailed blog post once we’ve had the chance to analyze all the imagery. In the meantime, we’re excited to share a quick overview of the project. 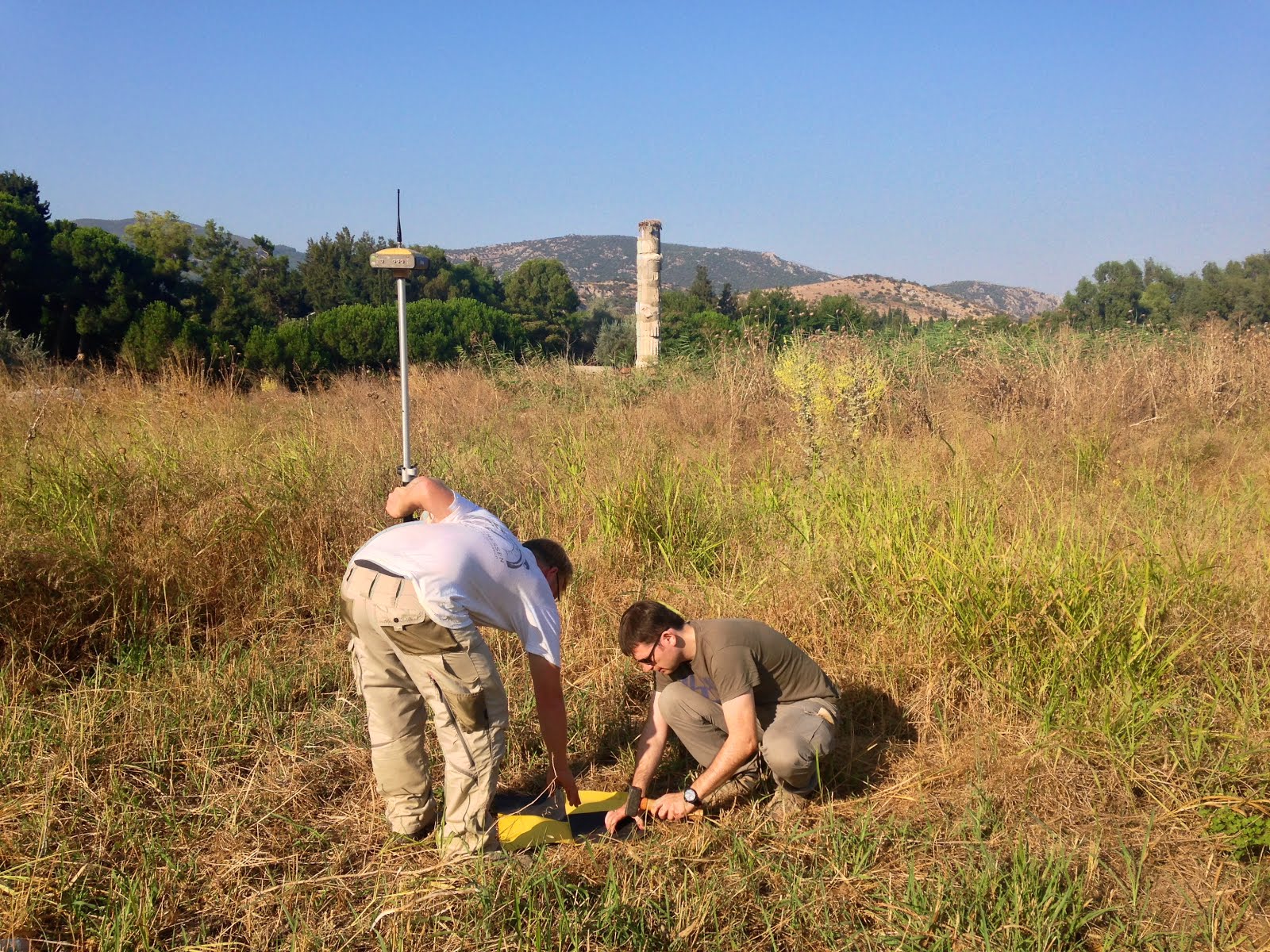 Setting up Ground Control Points (GCPs) to improve the precision of the imagery. In the background, one of the Seven Wonders of the Ancient World: The Temple of Artemis in Ephesus, Turkey.

END_OF_DOCUMENT_TOKEN_TO_BE_REPLACED

A couple months ago four members of Drone Adventures spent two weeks in the wild Namibian bush drone-mapping savanna, sand and rock for land and wildlife conservation.  You can read about our initial results in our first blog post.

As a picture speaks a thousand words, here’s a gallery of images from our flights at Kuzikus Wildlife Reserve and the Gobabeb Research and Training Center.